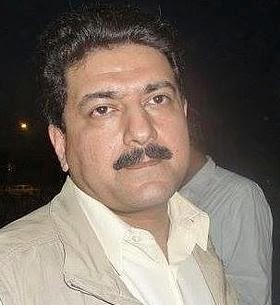 Pak Famous TV channel Geo Tv anchor and Journalist Mr Hamid Mir was severely injured on Saturday when unknown gunmen on motorbikes opened fire at his car on a busy road in Karachi.
Mir was targeted at around 5:15 in the evening when he left Jinnah International Airport, after he reached Karachi from Islamabad and was on the way to his office at II Chundrigar Road.
Karachi police chief Shahid Hayat said Hamid Mir received three bullets in lower part of his body. He was to a private hospital where doctors said he was now conscious and out of danger.
Mir had complained of receiving death threats from Inter-Services Intelligence and his family alleged ISI DG Lt Gen Zaheerul Islam was behind the attack.
But army mouthpiece ISPR rejecting allegations against the spy agency and its chief called for an immediate independent inquiry in the case to ascertain facts. An ISPR spokesman condemning the incident prayed for Mir’s well being and quick recovery. However, he said, allegations on ISI and its head were misleading and regrettable.
Police said Mir, who was along with his driver, was attacked when his car reached at a U-turn. District East SSP Pir Muhammad Shah said nine empty bullet shells were found from the spot. “One of the attackers opened fire at Mir’s car while another assailant on a motorcycle was on the backup.” The route is usually guarded by security personnel because of the VIP movement but the gunmen managed to flee without any resistance. The police was unable to get the footage from the nearby CCTV cameras but SSP Shah said that they were trying to make sketches of culprits with the help of eyewitnesses.
According to new bulletin Mr. Mir is out of danger.