PM Narander Modi and Kurta is Famous In America and Europe

We have proud and good news from all universe of our New PM Narander Modi. Narender Modi is not our prime minster of India but it’s a brand name of all worlds. If we talk about America Media and Presidents Barack Obama all are fans of Modi and Modi Kurta. So in the September 2014 Narander Modi Visit to America and American Press and peoples of Washington are waiting and prepared for welcome to Narander Modi. 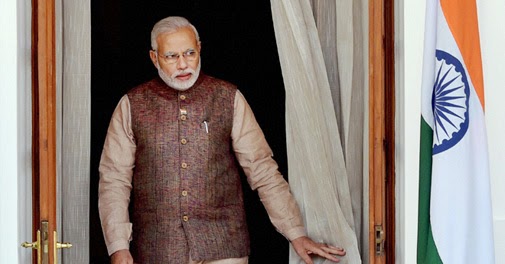 The New York Times sees in "Narendra Modi: A Leader Who Is What He Wears" saying "Even by the standards of a world the image-craft of India's new prime minister, Narendra Modi - and its fashion fallout - has been something of a case study."
News Paper of Time makes headlines "Indeed, even by the standards of India itself, where leaders have perhaps understood the use of clothing as a communication device better and longer than any of their international peers ...Mr. Modi stands out. Literally and strategically," says "It all speaks to Mr. Modi's success in associating his personal style with his political platform, to the benefit of both," says the magazine.
"Objectively speaking, the Modi Kurta itself does not exactly represent an extraordinary aesthetic advance; rather it symbolizes a set of values. And therein lies its allure," it adds.
Probing "what Narendra Modi's fashion says about his politics," the Washington Post says: "Move aside, Michelle Obama. The world has a new fashion icon.
"And no, it's not Vladimir Putin, despite his fitness regimen - it's India's new prime minister, Narendra Modi."
"Countless articles have been written about his look, from his vast collection of hats to his iconic long tunic, the ModiKurta. Yes, it has its own hash tag," it notes.
"Although Modi has a carefully cultivated Hindu nationalist image, it doesn't mean he isn't a fan of European designers," the Post says.
"His glasses are said to be Bvlgari, and his watch is Movado, two brands at odds with his traditional Indian look but in keeping with his pro-business ideology," it adds.
In another piece in Time, Tunku Varadarajan dilates on how "As Narendra Modi stormed into the consciousness of the world beyond India, analysts everywhere scrambled to interpret him for their readers and viewers."
Modi, he notes, has been likened to Margaret Thatcher, Ronald Reagan, Ariel Sharon, Shinzo Abe and Deng Xiaoping, Vladimir Putin as also Turkey's Islamist-democrat Prime Minister Recep Tayyip Erdogan.
Meanwhile, at the State Department spokesperson Marie Harf again recalled that Obama and Secretary of State John "Kerry have both said, we look forward to welcoming the prime minister to Washington."
But she had "nothing to announce on dates. I know there are a lot of reports out there about dates, but we don't have dates yet."