Wimbledon 2014: Who win the Final of Wimbledon 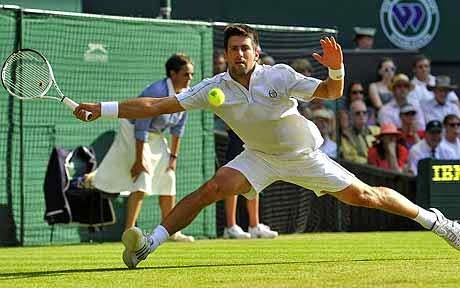 Novak Djokovic brought Roger Federer's Wimbledon fairytale to a halt on Sunday, but only after the most titanic struggle in a thrilling five- set final. It was a spectacular match that boiled up into the most cliff- hanging drama in the fourth and fifth set.

But in the end, it may have been the fact that Federer was giving away almost six years to his challenger that helped Djokovic over the line. The final was played at a breakneck pace, with Federer landing 69 per cent of his first serves and both men firing off winners – a remarkable 143 between them in the match.

How Many Times Djokovic Win Wimbledon

The greatest grass- court player these courts have ever seen, Federer was a huge favourite with the crowd. He drew some huge roars as he charged forward on point after point, looking to keep the rallies short and staccato with his net game.

But Djokovic had the game to negate him with extraordinary service returns and even better passing shots. The statistics said that Federer won 66 per cent of his points from the net but it felt much lower, so often did the ball go flying past him as he approached.

Djokovic might not have started quite as dominantly as Petra Kvitova did in Saturday's final, but he was the better player for most of the first set, only allowing Federer to steal it at the death via a couple of inspired points in the tie- break.

The balance of power was restored early in the second set. Federer lost his opening service game – only the second time he had been broken in the tournament — and never managed to get back on terms.

That turned the third set into an absolute mustwin for both players. Federer ramped up his service game hugely now, sending down no fewer than 13 aces in the set and winning one " perfect" game with four in a row.

But when the tie- break came around, he missed a crucial forehand, dragging the ball a foot wide of the sideline to give away the mini- break.

Two strong points from Djokovic on his own serve and Federer was left facing a 1- 2 deficit in sets.

With that age gap to work against, this seemed an impossible task, and the prognosis worsened further when Federer was broken again in the fourth set. But now the match really sprung to life as the two men's serves, previously all but impregnable, began to falter.

Federer recovered the break, only to lose it again as Djokovic stood on the threshold of glory: serving for the title at 5- 3. But he could not convert, being broken again, and then failing to snare his first match point in the next game when Federer hit the service line with an ace.

The final set swung to and fro, with Djokovic being forced to save a break point in the seventh game. Early in that set, he had seemed to be at odds with himself, calling the trainer to deal with a knee he had fallen heavily on in the first set, and throwing up his hands in despair when he missed shots.

But he clocked on properly after saving that break point, and from there he was nearflawless, finally claiming victory when Federer hit a backhand into the net to be broken for the fourth and final time in the match. Perhaps it was a mercy, considering what happened in the fourth set, that Djokovic did not have to serve for it.