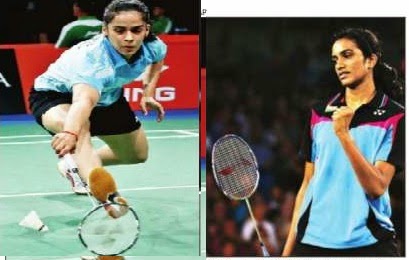 Saina Nehwal survived a scare to reach the quarterfinals of the World Badminton Championships at the Ballerup Sports Arena in Copenhagen on Thursday. The world No.7 got off to a stuttering start but recovered just in time to down fast rising Japanese youngster Sayaka Takahashi 14-21, 21-18, 21-12. Later, in a see-saw battle, PV Sindhu squeezed past Yeon Ju Bae of Korea 19-21, 22-20, 25-23 to join Saina in the last eight.

Meanwhile, women's singles world champion Ratchanok Intanon was knocked out by Minatsu Mitani of Japan 21-8, 12-21, 18-21. The Thai champion shuttler suffered injuries after her world title last year and has struggled to regain her form.

Saina was slow off the blocks as the Japanese girl began with a 4-0 lead in the first game. Though Saina reduced the lead and stayed close till 11-9, Sayaka raced ahead after the mandatory break by securing six successive points. Leading 17-9, Sayaka defended her lead quite well and did not allow the Indian to make a comeback. After the shock, Saina quickly changed her strategy . She first slowed down the pace of the game and was cruising ahead comfortably at 7-3. However, the world No.14 was in no mood to relent as she stunned the Indian by securing six straight points to surge ahead to 9-7.Sayaka looked like producing a big upset of the day when she trailed the Indian at 13-8 and then at 14-9.Facing an uphill task, Saina first concentrated on cutting down the lead and at 17-18 she notched up four winners to extend the contest into the third game.

Sayaka, running out of gas in the third game, was in the contest only till the seventh point. From then on it was Saina all the way . The Indian widened the gap to 12-7 and then to 16-8. After the change of courts, Sayaka offered no fight and caved in meekly.

Saina will now face world No.1 Li Xuerui of China in the quarterfinals on Friday. Saina, who also reached the quarters at the last edition in China, has lost to Xuerui seven times in their nine meetings. Li lashes out at Saina Chinese Olympic champion and Saina's opponent in the quarterfinals on Friday , Li lashed out at the Indian on Thursday . Responding to Saina's comments that Badminton World Federation (BWF) should limit the entries from a country (read China) in the event, Xuerui was reported as saying on Thursday , “Let her (Saina) beat me first, then we talk. Even if the number is reduced, she still has to beat players from China to win titles...Saina's issue is not only with us. Is she winning regularly against other non-China players?