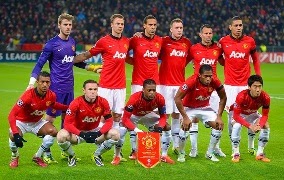 London: Manchester United will go in search of their first Premier League win under manager Louis van Gaal when they travel to Sunderland on Sunday.

If there was any doubt about the scale of the task facing the Dutchman, it was demonstrated by last weekend’s 2-1 opening day defeat at home to Swansea.

Sunderland, who started the season with a 2-2 draw at West Brom, will fancy their chances at the Stadium of Light despite the fact United signed Argentina World Cup defender Marcos Rojo from Sporting Lisbon in midweek.

But with United having finished a lowly seventh in the table last season, former Old Trafford favourite Paul Scholes believes it will take more than one big-name signing to revive their fortunes.

“The situation now has become ever more desperate for my former club,” ex-England midfielder Scholes wrote in his column for the Independent newspaper. “They have to sign some quality players. I am scared for United. Genuinely scared that they could go into the wilderness in the same way that Liverpool did in the 1990s.”

He added: “What do United need? Five players. Not five players with potential. Five experienced players... for now. Five proper players who can hit the ground running and turn around a situation that looks desperate. United’s forwards are as good as any team in the league. The problem is what comes behind them.”

The Belgian, signed by sacked United manager David Moyes following the pair’s time together at Everton, has still to score a competitive goal for United.

But star striker Robin van Persie is nearing full fitness and could feature against Sunderland.

Chelsea will look to carry on from where they left off in 3-1 win away to Burnley when they face another newly-promoted side in Leicester at Stamford Bridge on Saturday.

The day’s stand-out fixture sees FA Cup-holders Arsenal, fresh from their 2-1 win over Crystal Palace, travel to Everton, with Gunners manager Arsene Wenger saying: “We have started well in the Premier League and we want of course straight away to have a good result away from home. Everton is always a good opponent that tells you where you are, and for us it is a good test.” Newcastle will try to bounce back from defeat by champions Manchester City away to Aston Villa while managerless Crystal Palace face West Ham in an all-London clash.

Southampton, who saw several players leave for rival Premier League clubs in pre-season, are at home to West Brom while Swansea will look to make it two wins out of two when they welcome Burnley.

Rounding off the second round of Premier League fixtures, Manchester City face Liverpool -- the team they pipped to the title by just two points last season -- at Eastlands on Monday, with the possibility that former City striker Mario Balotelli could by then be a Reds player if a reported £16 million ($27 million, 20 million euros) move from AC Milan goes through.