While the war between the terrorist group Hamas and Israel still technically continues to plod along, by all accounts both sides are closer now than they ever have been since hostilities began to finally inking out a ceasefire agreement. Some of its alleged terms which have been leaked are surprising analysts, since they’re wondering what advantage, if any, does Hamas or Israel stand to gain by accepting them? 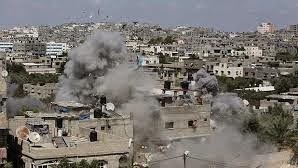 Hamas
From Hamas’ perspective it ‘wins,’ because it is not going to be dismantled nor disarmed, ergo it ‘lives on’ to fight another day at some point in the future against Israel. Unless Hamas changes its reason for existing, which is to destroy Israel and kill Jews worldwide regardless of their location, it will strike again – it considers exterminating Israel and the global Jewish population to be a ‘religious’ duty.
Abbas
Now being courted and suddenly in vogue again is the Palestinian National Authority’s (PNA’s) President, Mahmoud Abbas. In the newly proposed agreement, the PNA will gain strength at the expense of Hamas, it is to be ceded greater authority. It will work with Israel, Egypt and Jordan to strictly monitor not only goods entering and leaving legal ports and crossings in Gaza, it will also insure that all raw materials will be used to rebuild vital infrastructure instead of allowing items to be skimmed off by Hamas.
Israel is also promising to help restore electricity to Gaza, and will approve a four-fold increase in the supervised areas permitted along the coastline for fishing.
New elections are still scheduled to be held in a few months’ time, ideally ushering in new and younger leadership, depending on compliance of ceasefire terms and conditions. Theoretically, this ‘fresh blood’ new generation of politicians will harbor less militant views and be more open to negotiating final terms for an eventual two state solution, including the creation for the first time in history of a nation-state called ‘Palestine.’

Israeli Prime Minister, Benyamin Netanyahu, still has a hard sell to his cabinet concerning the points which comprise this proposed ceasefire. “What’s in it for Israel?” is a chorus he’s likely to hear from across the political spectrum.
According to public opinion polls, most Israelis want Hamas either destroyed or dealt a crippling blow from which it will never recover. Their overwhelming support for crushing Hamas gave Netanyahu his historic 91 percent backing and support to do exactly this.
Yet Hamas is still standing, albeit severely weakened, and it is not going to fully disarm nor get rid of its rockets. The terrorist group still refuses to officially recognize Israel, and it remains committed to its destruction.
Since the status quo isn’t changing, Hamas will still remain a threat who can launch yet more attacks with impunity anytime it wishes. The question many Israelis will be asking is why bother signing a ‘ceasefire’ when nothing has changed?

Politics Impacts
The short explanation is pure politics. Unlike in the previous wars Hamas started, it doesn’t have the widespread support this time around from either the Palestinian nor Arab streets anymore. Worse for Hamas, its previous state backers such as Saudi Arabia, Kuwait and Egypt no longer endorse it. For Hamas to retain what little support it still has requires that it accept this peace agreement with Israel, which should improve the living standards of especially Gazans. Hamas cannot afford to be perceived as an impediment to this objective, instead it must be seen in the eyes of Palestinians to be working to improve their collective existence.

Netanyahu’s advantage concerning this agreement is that it gives him a series of litmus tests the Palestinians must pass in order for them to be rewarded. Should Hamas get busted building yet more terror tunnels or get caught smuggling in cement for untoward purposes, Netanyahu can put the squeeze back on them with the full backing of the other signatories to this agreement, including the PNA.

Put another way, the terms of this proposed ceasefire gives the Palestinians in Gaza every reasonable incentive to improve their living conditions and reinvigorate economic development.

No one is under any illusions that these will either be not easy nor will major successes occur overnight. Yet the raw framework is now in place so that all parties can gain something positive out of this, as long as each of them are genuinely committed to accountability and transparency, because they’re truly committed to peace.