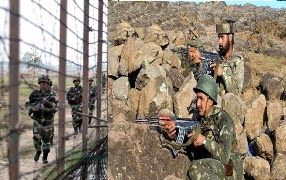 A villager shows bullet marks on the wall of his house after firing from Pakistan side in Vidhipur village, RS Pura, on Friday.
Pakistani troops on Friday targeted two border out posts (BoPs) and hamlets injuring villagers and damaging a few houses in R S Pura sub-sector of Jammu district drawing retaliation from Indian troops.

In the 14th ceasefire violation in the last 12 days, Pakistani Rangers resorted to indiscriminate and unprovoked firing on two BoPs along IB around 1 am, a BSF officer said.  BSF troops guarding two BoPs along IB, took positions and responded with equal calibre weapons which resulted in intermittent exchange of fire, which continued till 5 am.

On August 20, Pakistani troops had violated the ceasefire twice in Mangalnarh forward belt of Rajouri’s Manjakote sub-sector and Hamirpur sub-sector of Poonch district.

On August 19, Pakistani troops had violated the ceasefire twice by resorting to firing at Indian forward posts along the LoC in Hamirpur sub-sector of Poonch district.

On the intervening night of August 17 and 18, Pakistani troops resorted to heavy night-long mortar shelling and firing in Arnia and R S Pura sub-sectors of Jammu district, in which one villager was injured.

Pakistan troops had violated the ceasefire twice on August 17 by resorting to heavy firing with automatic and small arms along Arnia sub-sector along IB and Hamirpur sub-sector along Line of Control in Jammu and Poonch districts.