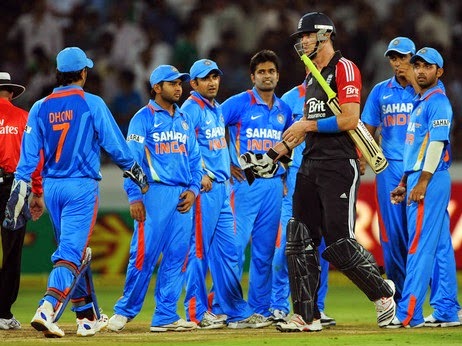 Rayudu, who was drafted in place of an injured Rohit Sharma, stitched 87 runs with Suresh Raina (42) from 14.5 overs for the fourth wicket as India chased down the modest target of 228 with 42 balls to spare.

Ajinkya Rahane, who was promoted to opener’s slot, made 45 while Virat Kohli struck 40, his highest innings score of the tour so far, as Indian batsmen had an easy outing against a pedestrian-looking England bowlers at Trent Bridge.

Rayudu grabbed his chance of making it to the playing eleven with both hands as he scored his third half century in his 14th ODI. He hit six fours in his 78-ball unbeaten knock.

Rayudu himself struck the winning runs — a two — off James Tredwell as India reached 228 for four in 43 overs to fashion a clinical win to the celebration of the Indians at the dressing room and seizable supporters at the stand.

Ravindra Jadeja was the other unbeaten batsman on 12.

The visiting batsmen played sensible cricket without taking much risks after their bowlers, led by off-spinner Ravichandran Ashwin (3/39), had put them on top by dismissing England for 227.

Shikhar Dhawan was the lone Indian batsman who did not make a substantial contribution in the match which saw home side paceman James Anderson being booed by Indian supporters.

Anderson was involved in an ugly spat with Indian all-rounder Ravindra Jadeja in the first Test at the same venue here. India had lost the five-match Test series 1-3.

The first ODI at Bristol was abandoned without a ball being bowled due to rains. The remaining two ODIs of the series will be played at Birmingham (Sept 2) and Leeds (Sept 5).

A change in partner did not bring about a change in fortunes — or indeed — approach for Dhawan as he was recklessly out in the eighth over caught by Eoin Morgan at point off Chris Woakes.

Kohli then came to the crease and did not look an out-of-touch batsman. He hit James Tredwell down the ground for a straight six.

He looked in good touch despite his poor run of scores and added 50 runs for the second wicket with Rahane. The make-shift opener too was scoring at a fair clip and just when the two were looking comfortable, a wicket fell against the run of play.

It was Rahane who threw away his innings as he attempted to play a delivery from Steve Finn down to third man, only to edge it to keeper Jos Buttler.

It brought Rayudu to the crease and he added another 35 runs with Kohli for the third wicket without much fuss. Kohli, who had been looking good so far, suddenly found the fielder at mid-on as he tried to flick one from Ben Stokes.

Kohli could not believe that he had been just dismissed and even had a heated exchange with the bowler as he walked back.

The in-form Raina then joined Rayudu at the crease and together they put on a sedate 87-run stand for the fourth wicket. The duo looked comfortable in the middle as the English bowling could not trouble them, bringing up the 150-run mark in the 32nd over.

They added 34 runs in the batting power-play without much fuss, bringing the 200-run mark in the 38th over. In that very same over, Rayudu had reached his half-century off 63 balls, with five fours.

Raina was out caught in the deep off Tredwell with just 21 runs needed for India to win. And Jadeja was sent up the order sensing the crowd’s mood — with a substantial Indian presence — who had been chanting his name all day and booing Anderson (0/29). They added a quick-fire 21 runs to take India past the finish-line without much worry.

Earlier, England squandered away a good start as the Indian bowlers, led by the spinners, bowled them out for 227.

Put into bat, England started on a brisk note courtesy an 82-run opening partnership between Alastair Cook (44) and Alex Hales (42) but the spinners checked their surge by picking up wickets at regular intervals.

Hales, playing his first ODI in front of his home crowd, was caught behind off part-time spinner Suresh Raina (1-37) while Cook was stumped off the bowling of Ambati Rayudu (1-8).

Spinners continued to have a field day as left-arm spinner Ravindra Jadeja (1-38) got Joe Root stumped for 2 while off-spinner Ravichandran Ashwin (3-39) got Eoin Morgan caught behind for 10.

Ian Bell (28) hung around for a while only to be run out at the non-strikers end as Mohit Sharma’s direct throw caught the batsman well short of his ground.

Ashwin got another wicket after Raina took a beautiful swooping one-handed catch at first slip to send Ben Stokes out for 2.

Mohammed Shami (1-40) also joined the party after picking up Chris Woakes for 15 as the hosts slipped further.

Wicketkeeper-batsman Jos Buttler (42) showed some grit but failed to read Ashwin’s off spin in the 48th over to give the bowler his third wicket.

James Tredwell (30 off 18 balls) played a brisk cameo in the final overs to give England some respectability as the left-hander hit three fours and a six to help England snatch 18 runs from the last over of the innings.

Tredwell though was caught and bowled off Bhuvneshwar Kumar (1-45) on the penultimate delivery while Steve Finn was run out on the final ball.

England did manage to hit 45 runs in the last 5 overs but considering their good start, the hosts may have fallen well short of a competitive score.

James Tredwell c and b Kumar 30

James Anderson not out 0

Ambati Rayudu not out 64

Ravindra Jadeja not out 12