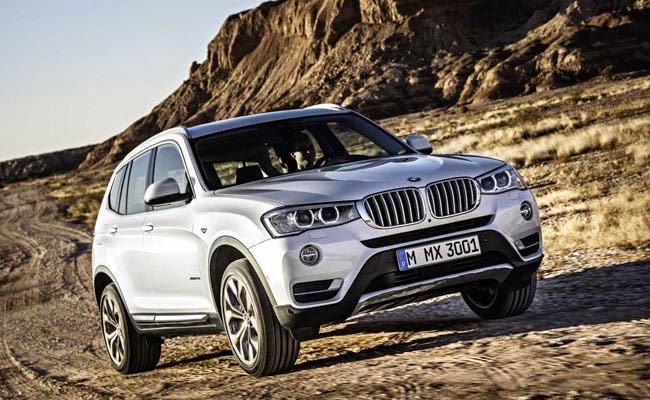 Exhibited earlier this year at the 2014 Geneva Motor Show, BMW India will now launch the X3 facelift here today. Since, it is just a mid-life makeover, the crossover will mainly receive cosmetic changes and minor technical upgrades.

The front-fascia of the updated X3 gets relatively larger head-lamps with a rather prominent BMW kidney grille. That said, the LED infused head-lamps are likely to be offered as an optional feature. The front and rear bumpers have also been revamped, while other changes include ORVMs with side blinkers and restyled alloy wheels. BMW will most probably also introduce new body paint options.

Visually, the new X3 differentiates itself from the outgoing model with the help of its restyled twin circular headlights, a more eye-catching kidney grille, new front and rear bumpers, and exterior mirrors with integrated turn signal indicators. Inside, the cabin gets premium interiors with chrome accents, coverable cup holders and new panelling. The HVAC display is entirely new and the optional navigation system has been replaced by a new re-engineered unit.

Globally, the new X3 is available with a choice of four diesel and three petrol engines, with outputs ranging from 150bhp to 313bhp, but for the Indian market, the updated mid-size SUV is expected to get the TwinPower 2-litre diesel engine which has been tuned to offer more power and efficiency. The engine churns out 187bhp of power and 400Nm of torque in the xDrive models (AWD) and 147bhp and 360Nm of torque in the sDrive. BMW India may only offer it in a single engine option which, in all probability, will be with the xDrive variant.

Like the existing X3, this new model will compete with the Audi Q5 and the Land Rover Freelander 2 in the Rs 45-60 lakh range. Full details on the vehicle will be available only tomorrow because that’s when BMW will be launching it here in India.