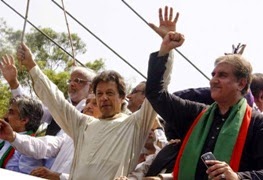 Sharif has ruled out resigning, but agreed to discuss other demands of the two leaders including a call for investigation into the alleged rigging in last year’s election. The government held the first round of talks with the two leaders Wednesday. As the opposition groups mounted pressure on the government, the National Assembly or lower house of parliament Thursday unanimously passed a resolution rejecting the “unconstitutional demands of the protesting parties for the resignation of the prime minister and dissolution of the assemblies”, Xinhua reported.

The resolution moved by senior politician Mahmoud Khan Achakzai resolved to uphold the supremacy of the constitution and sovereignty of the parliament. Political analysts are of the view that the resolution will give a boost to the prime minister and could further isolate Khan, whose PTI party has 35 members in the 342-member National Assembly.
Qadri has no representation in parliament.

Khan has announced that his party’s lawmakers would quit the national and two provincial assemblies as part of the protest. The resignations have not been submitted to the speaker so far.  Sharif was present during the assembly session and is likely to deliver a speech in the house after a debate. The National Assembly reiterated its resolve that democracy would continue to function and flourish and that no protest could pose any threat to the system.The resolution also strongly condemned the “derogatory and defamatory language used by the leadership of protesting parties”.

Nawaz Sharif meets president: Prime Minister Nawaz Sharif on Thursday discussed the current political imbroglio with President Mamnoon Hussain, a media report said. Nawaz Sharif called on the president at the Aiwan-i-Sadr in Islamabad. During the meeting, Nawaz Sharif took the president into confidence on the prevailing political crisis and demands put forward by the Pakistan as per source of Pak Media.
The president was keen that the crisis be resolved through political means and dialogue. The PTI and PAT are demanding the resignation of Nawaz Sharif whose government, they say, is tin office due to a rigged 2013 general election.


Pakistan Court Lawyers One day’s strike for Pak Protests
Islamabad: Two lawyers’ organisations observed a country-wide strike Thursday to support democracy and ensure supremacy of the constitution.
The decision was taken during a joint executive body meeting of PBC and SCBA here Wednesday.
It was stressed in the meeting that all political parties should make serious efforts and all possible practical Endeavour’s to resolve the present political crisis in the larger national interest and for the integrity of the country without compromising constitutional and legal norms.
A woman supporter of Pakistan’s cricketer-turned-politician Imran Khan with her children shouting during a protest in Islamabad’s high-security Red Zone, on Wednesday. Pak Army Chief Gen Rasheel Sharif asked the government to hold negotiations with protesters to settle a mass demonstration outside parliament, officials said.