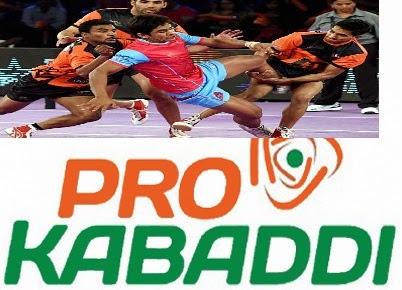 It is back to where it all started. After taking the nation by storm with five weeks of heart-stopping display of kabaddi, the carvan of Pro Kabaddi League is set to unfold its biggest battles here at the historic Sardar Vallbhbhai Patel Stadium at the National Sports Club of India's premises on Friday .

While table-toppers Jaipur Pink Panthers will take on Patna Pirates in the first semifinal at 8 pm, hosts U Mumba will take on Bengaluru Bulls in the second semis at 9.10 pm.

The Jaipur vs Patna contest promises to be a thriller. Ahead of the clash, Jaipur Pink Panthers coach Sarkar Sharma warned that his team would leave no stone unturned in its quest to reach the final.“Though we had gone down by 22 points when we met them the last time, we had beaten them in our first encounter. Howev er, tomorrow will be a new day .I am very much positive we will put a great show,“ said Sharma.

Sharma also emphasized that his team will be heavily banking on raider Maninder Singh. “He is a dark horse for us. Not many people expected him to do what he has done. He has certainly become a pillar of our team,“observed Sharma.Rohit Rana is another player who will be manning their defence. “He is just 26, but the kind of performance he has put up in defence, shows that he carries a mature head on his shoulder.,“Sharma said.

On the other hand, Patna Pirates coach Rambir Singh Khokhar too was certain of his team making every effort to sail through to the final. The biggest worry for the Patna team is that their star raider Rakesh Kumar is carrying a ligament tear in a couple of fingers on his right hand and may not be able to play. Khokhar, however, was confident that Rakesh will start.“He knows it is a crucial match for the team. We are going to consult doctors and physios in Mumbai and I am very much confident that Rakesh will take to the field tomorrow,“ Khokhar said.

U Mumba certainly enjoy home advantage against the Bengaluru Bulls. “We have planned our strategy and are sure that it will work against Bengaluru,“ said Mumba coach Ravi Shetty. “Our star defender Shabeer Bapu will be back in action tomorrow and we are sure we will not disappoint the Mumbai crowd,“ added Shetty .

The Bengaluru team might start with a disadvantage as two of its star players have health concerns.

While top raider Ajay Thakur is down with both jaundice and typhoid, skipper and strong defender Manjit Chillar is experiencing pain in his right ankle. “Despite this, both of them have played in the last match and I am sure they will be playing again tomorrow,“ said coach Randhir Singh.

HOW THE TOP FOUR STAKE UP

U MUMBA STRENGTH: Skipper Anup Kumar has impressed with his brilliant raids. He has also scored a century of raid points. The duo of Mohit Chillar and Rishank Devadiga has strengthened the defence.WEAKNESS: Their main defender Shabeer Bapu has missed the last three matches due to injury. Also, the team depends heavily on the raiding power of Anup Kumar and Devadiga. It could prove to be costly.

BENGULURU BULLS STRENGTH: Led by Manjit Chillar, Bulls have blossomed as a team.In defence, veteran Dharmaraj Cheralathan has been a big advantage.WEAKNESS: Raider Ajay Thakur is down with jaundice and typhoid and star defender Manjit Chillar is having pain in right ankle.Though both have played despite this, a knock-out game may stretch them a bit too much.

JAIPUR PINK PANTHERS STRENGTH: A strong defence led by skipper Navneet Gautam and the brilliant Rohit Rana. In attack, Maninder Singh and Jasvir Singh have put in exceptional efforts.WEAKNESS: The team depends on the raiding duo of Jasvir Singh and Maninder Singh, which can prove costly if any of them has a bad day. It must be noted that Jaipur have been on an eightgame winning streak, which means that they have never really been stretched.

PATNA PIRATES STRENGTH: Two outstanding raiders in Sandeep Narwal and Ravi Dalal. Have a reputation of fighting till the last breath.WEAKNESS: Star raider Rakesh Kumar is carrying a ligament tear in two of his fingers in the right hand, and may not be able to play. The team is also relatively inexperienced.