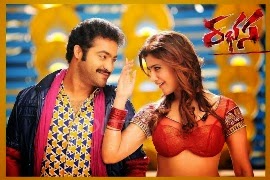 Critics appreciated NTR's performance including the emotional sequences, comedy, dance and action scenes. Samantha and Pranitha have also done their parts well. Comedian Brahmanandam appears in the second half and entertains the audience. His scenes with NTR are said to be one of the plus points of the film. All other supporting actors have done justice to their roles.

On the technical aspects, critics stated that Thaman has given an entertaining album. Cinematography and editing have been decent, while dialogues are impressive in parts.

Here is the review roundup of "Rabhasa"

"Rabhasa is a typical Telugu commercial film which would satisfy the audience that doesn't expect anything more from a movie. Comedy in the second half would make this a safe bet at the box office. But the audience who look for some variety and novelty will be left fuming by the end. Rabhasa is a commercial film made for masala lovers. Liking it or not will purely depend upon your personal taste," according to Gulte.

"Rabhasa is definitely not the blockbuster hit that NTR was desperately looking for. But some entertaining comedy and NTR's one man show, will surely make the general audience lap up this average entertainer during this festive season," according to 123telugu.

"It is a regular format film and is a good one time watch," said OM of Andhraboxoffice (ABO).

Regarding the box office prospects - "The film has got the commercial elements to do good business at the box-office. Although it is lacking in publicity, may still turn out be a safe one. And any thing more is upto NTR and is bonus," ABO website stated.

"After scoring a mass hit like 'Kandireega', director Santhosh Srinivas took up the mighty task of delivering a hit with Jr NTR who isn't in great form in the past few years. It must be said that he succeeded partly in his attempt to deliver a decent film. Had if 'Rabhasa' consists of a better screenplay and engaging first half, It would have been a blockbuster for sure," said APToday.