Source Daily Bhaskar: Wickedleaks has launched its new Smartphone which boasts the power of an octa-core chipset in the mid-range Smartphone segment. Wickedleak’s newbie the Wammy Note 3 smartphone is priced at INR 12,990 and seems to be the company’s answer to the likes of Xiaomi Mi3, which has made quite a buzz in the market. 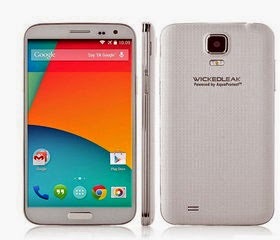 On the design front, Wickedleak has taken inspiration from Samsung’s perforated rubber back panel design as it has used a similar back panel on the Wammy Note 3. Talking of the specifications, the Wammy Note 3 smartphone comes with a 5.2-inch full-HD 1080p display with AGC Dragontrail glass protection which is also used on the display of the Xiaomi Redmi 1S smartphone, which will go on flash sale on September 2.

Also Read: Demand and supply are completely out of sync, says Hugo Barra on Xiaomi Mi3

The phone is powered by MediaTek MT6592 octa-core chipset clocking at 1.7 GHz and paired with Mali 450 GPU, which puts it against the Xiaomi Mi3 which however boasts Qualcomm MSM8274AB Snapdragon 801 quad-core chipset ticking at 2.3 GHz. The Wammy Note 3 comes with 2 GB of RAM and 8 GB of internal storage which can be expanded to 32 GB using a micro-SD card.

The phone runs on the Android 4.4 KitKat operating system. It sports a 13-meagpixel rear camera with BSI sensor and LED flash and a 5-megapixel front-facing camera. It also has dual-SIM (3G+2G) capabilities, and is powered by a 3,800mAh battery.

The smartphone will be available for customers from September 1 through the company’s website. The company is also offering the Aquaprotect version (water resistant version) of the phone, for an additional INR 1,500.