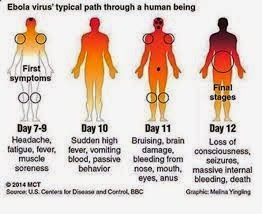 Report Collected From WHO officials: Ebola virus disease (EVD), formerly known as Ebola haemorrhagic fever, is a severe, often fatal illness in humans.
EVD outbreaks have a case fatality rate of up to 90%.
EVD outbreaks occur primarily in remote villages in Central and West Africa, near tropical rainforests.
The virus is transmitted to people from wild animals and spreads in the human population through human-to-human transmission.
Fruit bats of the Pteropodidae family are considered to be the natural host of the Ebola virus.
Severely ill patients require intensive supportive care. No licensed specific treatment or vaccine is available for use in people or animals.

Ebola first appeared in 1976 in 2 simultaneous outbreaks, in Nzara, Sudan, and in Yambuku, Democratic Republic of Congo. The latter was in a village situated near the Ebola River, from which the disease takes its name.

Genus Ebolavirus is 1 of 3 members of the Filoviridae family (filovirus), along with genus Marburgvirus and genus Cuevavirus. Genus Ebolavirus comprises 5 distinct species:

BDBV, EBOV, and SUDV have been associated with large EVD outbreaks in Africa, whereas RESTV and TAFV have not. The RESTV species, found in Philippines and the People’s Republic of China, can infect humans, but no illness or death in humans from this species has been reported to date.
Transmission

Ebola is introduced into the human population through close contact with the blood, secretions, organs or other bodily fluids of infected animals. In Africa, infection has been documented through the handling of infected chimpanzees, gorillas, fruit bats, monkeys, forest antelope and porcupines found ill or dead or in the rainforest.

Ebola then spreads in the community through human-to-human transmission, with infection resulting from direct contact (through broken skin or mucous membranes) with the blood, secretions, organs or other bodily fluids of infected people, and indirect contact with environments contaminated with such fluids. Burial ceremonies in which mourners have direct contact with the body of the deceased person can also play a role in the transmission of Ebola. Men who have recovered from the disease can still transmit the virus through their semen for up to 7 weeks after recovery from illness.

Health-care workers have frequently been infected while treating patients with suspected or confirmed EVD. This has occurred through close contact with patients when infection control precautions are not strictly practiced.

Among workers in contact with monkeys or pigs infected with Reston ebolavirus, several infections have been documented in people who were clinically asymptomatic. Thus, RESTV appears less capable of causing disease in humans than other Ebola species.

However, the only available evidence available comes from healthy adult males. It would be premature to extrapolate the health effects of the virus to all population groups, such as immuno-compromised persons, persons with underlying medical conditions, pregnant women and children. More studies of RESTV are needed before definitive conclusions can be drawn about the pathogenicity and virulence of this virus in humans.
Signs and symptoms

EVD is a severe acute viral illness often characterized by the sudden onset of fever, intense weakness, muscle pain, headache and sore throat. This is followed by vomiting, diarrhoea, rash, impaired kidney and liver function, and in some cases, both internal and external bleeding. Laboratory findings include low white blood cell and platelet counts and elevated liver enzymes.

People are infectious as long as their blood and secretions contain the virus. Ebola virus was isolated from semen 61 days after onset of illness in a man who was infected in a laboratory.

The incubation period, that is, the time interval from infection with the virus to onset of symptoms, is 2 to 21 days.
Diagnosis

Other diseases that should be ruled out before a diagnosis of EVD can be made include: malaria, typhoid fever, shigellosis, cholera, leptospirosis, plague, rickettsiosis, relapsing fever, meningitis, hepatitis and other viral haemorrhagic fevers.

Ebola virus infections can be diagnosed definitively in a laboratory through several types of tests:

Samples from patients are an extreme biohazard risk; testing should be conducted under maximum biological containment conditions.
Vaccine and treatment

No licensed vaccine for EVD is available. Several vaccines are being tested, but none are available for clinical use.

No specific treatment is available. New drug therapies are being evaluated.
Natural host of Ebola virus

In Africa, fruit bats, particularly species of the genera Hypsignathus monstrosus, Epomops franqueti and Myonycteris torquata, are considered possible natural hosts for Ebola virus. As a result, the geographic distribution of Ebolaviruses may overlap with the range of the fruit bats.
Ebola virus in animals

Although non-human primates have been a source of infection for humans, they are not thought to be the reservoir but rather an accidental host like human beings. Since 1994, Ebola outbreaks from the EBOV and TAFV species have been observed in chimpanzees and gorillas.

Since 2008, RESTV viruses have been detected during several outbreaks of a deadly disease in pigs in People’s Republic of China and Philippines. Asymptomatic infection in pigs has been reported and experimental inoculations have shown that RESTV cannot cause disease in pigs.
Prevention and control
Controlling Reston ebolavirus in domestic animals

No animal vaccine against RESTV is available. Routine cleaning and disinfection of pig or monkey farms (with sodium hypochlorite or other detergents) should be effective in inactivating the virus.

If an outbreak is suspected, the premises should be quarantined immediately. Culling of infected animals, with close supervision of burial or incineration of carcasses, may be necessary to reduce the risk of animal-to-human transmission. Restricting or banning the movement of animals from infected farms to other areas can reduce the spread of the disease.

As RESTV outbreaks in pigs and monkeys have preceded human infections, the establishment of an active animal health surveillance system to detect new cases is essential in providing early warning for veterinary and human public health authorities.
Reducing the risk of Ebola infection in people

In the absence of effective treatment and a human vaccine, raising awareness of the risk factors for Ebola infection and the protective measures individuals can take is the only way to reduce human infection and death.

Reducing the risk of wildlife-to-human transmission from contact with infected fruit bats or monkeys/apes and the consumption of their raw meat. Animals should be handled with gloves and other appropriate protective clothing. Animal products (blood and meat) should be thoroughly cooked before consumption.
Reducing the risk of human-to-human transmission in the community arising from direct or close contact with infected patients, particularly with their bodily fluids. Close physical contact with Ebola patients should be avoided. Gloves and appropriate personal protective equipment should be worn when taking care of ill patients at home. Regular hand washing is required after visiting patients in hospital, as well as after taking care of patients at home.
Communities affected by Ebola should inform the population about the nature of the disease and about outbreak containment measures, including burial of the dead. People who have died from Ebola should be promptly and safely buried.

Pig farms in Africa can play a role in the amplification of infection because of the presence of fruit bats on these farms. Appropriate biosecurity measures should be in place to limit transmission. For RESTV, educational public health messages should focus on reducing the risk of pig-to-human transmission as a result of unsafe animal husbandry and slaughtering practices, and unsafe consumption of fresh blood, raw milk or animal tissue. Gloves and other appropriate protective clothing should be worn when handling sick animals or their tissues and when slaughtering animals. In regions where RESTV has been reported in pigs, all animal products (blood, meat and milk) should be thoroughly cooked before eating.
Controlling infection in health-care settings

Human-to-human transmission of the Ebola virus is primarily associated with direct or indirect contact with blood and body fluids. Transmission to health-care workers has been reported when appropriate infection control measures have not been observed.

It is not always possible to identify patients with EBV early because initial symptoms may be non-specific. For this reason, it is important that health-care workers apply standard precautions consistently with all patients – regardless of their diagnosis – in all work practices at all times. These include basic hand hygiene, respiratory hygiene, the use of personal protective equipment (according to the risk of splashes or other contact with infected materials), safe injection practices and safe burial practices.

Health-care workers caring for patients with suspected or confirmed Ebola virus should apply, in addition to standard precautions, other infection control measures to avoid any exposure to the patient’s blood and body fluids and direct unprotected contact with the possibly contaminated environment. When in close contact (within 1 metre) of patients with EBV, health-care workers should wear face protection (a face shield or a medical mask and goggles), a clean, non-sterile long-sleeved gown, and gloves (sterile gloves for some procedures).

Laboratory workers are also at risk. Samples taken from suspected human and animal Ebola cases for diagnosis should be handled by trained staff and processed in suitably equipped laboratories.
WHO response

WHO provides expertise and documentation to support disease investigation and control.

Recommendations for infection control while providing care to patients with suspected or confirmed Ebola haemorrhagic fever are provided in: Interim infection control recommendations for care of patients with suspected or confirmed Filovirus (Ebola, Marburg) haemorrhagic fever, March 2008. This document is currently being updated.

Standard precautions are recommended in the care and treatment of all patients regardless of their perceived or confirmed infectious status. They include the basic level of infection control—hand hygiene, use of personal protective equipment to avoid direct contact with blood and body fluids, prevention of needle stick and injuries from other sharp instruments, and a set of environmental controls.