Robots cooking and serving in a restaurant.

The restaurant in Kunshan, in the east of the country, has a fleet of over a dozen robots who do everything from greet customers at the door, to waiting on tables and cooking up dumplings and stir fry in the kitchen. 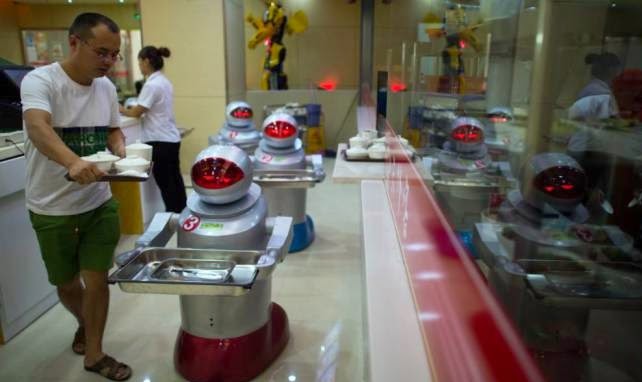 It may sound like a scene from a sci-fi movie but a new cafe in China is running its restaurant using robots. Located in Kunshan, eastern China, the restaurant relies on over a dozen machines for tasks such as greeting customers, waiting on tables and cooking basic meals. The eatery becomes the third cafe in the world to rely on the use of robot employees, potentially giving a glimpse into how future businesses could operate. Owner Song Jugang explained that the robots cost around £4000 - The same as the yearly pay for a human employee. The futuristic machines have a limited vocabulary and take two hours to charge.