Amazing Research: Woman are More spending time with Smartphone Instead of Mans 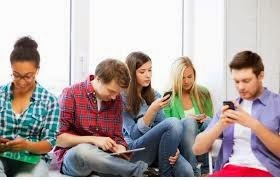 New York: Traditionally, men are more considered to be Tech savvy, but studies show that Young women are more addicted to mobile phones and as soon as the phone is away from the eye they become restless. It is also likely that women build relationships and send SMS or e-mail through mobile phones is increasingly used for social reasons. The studies found that 60% of women in the college-going crowd remain glued to their mobile phones.

Beylor Hankamr University School of Business, James Roberts said College women per day spend 10 hours, whereas men stick to 8 hours on the mobile phone per day. It is threatening to affect their academic ability.

Roberts said that men can have themselves from social media. Researchers found, Most men spend time in Facebook, and also spend time on Social Networking Websites like Instagram and Twitter. On Twitter they follow players and news. This study was conducted based on online surveys of 164 college students. Its been published in the study journal termed as “Behavioral Addiction.”