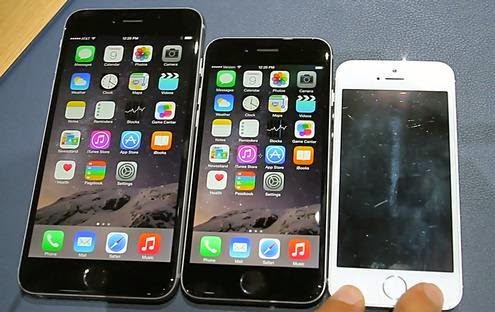 Apple did not let down its admirers despite failing to surprise them on Tuesday. In line with the numerous leaks and rumours ahead of its launch event, the iconic Cupertino, California company unveiled two new thinner, bigger and faster smartphones — iPhone 6 and iPhone 6 Plus — and a new smartwatch simply called the Apple Watch.

Apple announced it has scrapped the 32GB variant with iPhone 6. It will come in 16, 64 and 128GB options. In the US market, where telecom carriers provide subsidies on smartphones, the two models iPhone 6 and 6 Plus — will be available for $199, $299 and $399 respectively, on a two-year contract. The iPhone 6 (unlocked version) starts at $649 while the iPhone 6 Plus (unlocked version) starts at $749.

In the Indian market, the two iPhones will be launched in India on October 17, according to Apple's local website. There is no official word on pricing yet.

According to Apple, the displays deliver higher contrast, dual‑domain pixels for more accurate colour at wider viewing angles and an improved polarizer.

One thing that even Apple fanboys will admit openly and bitterly is their gripe with the iPhone battery. The good news is that battery life of iPhone 6 and 6 Plus is relatively better than that of iPhone 5S. iPhone 6 will deliver 3G talk time of 14 hours and run 10 hours if the user is browsing the internet on 3G and 4G networks. The bigger model, iPhone 6 Plus, will offer 3G talk time of 24 hours and 12 hours of web browsing on 3G and 4G.


As rumoured, iPhone 6 Plus will be a $100 more expensive for each storage variant compared to iPhone 6. iPhone 5S will now cost $99 on a two-year contract, while iPhone 5C is free.

Powered by the new A8 processor, iPhone 6 is up to 50% more energy efficient, so you can have higher sustained performance, claimed Apple.

The 64-bit CPU architecture-based A8 processor is 20% faster in application processing and 50% faster in rendering graphics compared to its predecessor. It is able to sustain performance-intensive tasks like playing a game at higher frame rates.

Apple also increased the pixel density of the two smartphones, with the smaller one having 38% more pixels at 1334x750p resolution and the bigger iPhone 6 Plus sporting 185% more pixels with screen resolution of 1920x1080p.

Apple called the new display panels Retina HD, a "new generation" of iPhone screens. These LCD panels feature ion strengthened glass, but there was no word on the long-rumoured sapphire glass panel.

The two iPhone 6 models sport an 8MP iSight camera that features phase detection. Despite no increase in camera resolution, iPhone 6 takes 43MP panorama photos. And like many rivals, including Samsung Galaxy Note 4 and S5, HTC One (M8) and LG G3, iPhone 6 and 6 Plus feature Optical Image Stabilization (OIS) for blur-free photos and videos.

The new iPhones support landscape mode. Apple also unveiled its own take on single-handed operation mode, wherein touching the Home button quickly will shrink down the whole display area such that the buttons on the top can be accessed easily.


The Power button in the iPhone 6 and 6 Plus is on the side. It features a barometer sensor that can measure relative elevation.

Apple has also announced Apple Pay a new mobile payments service that works with iPhone 6 and iPhone 6 Plus through NFC, a dedicated chip called the Secure Element, and Apple's Touch ID fingerprint scanner. Apple Pay will also work with the newly announced Apple Watch, extending the service to owners of iPhone 5, iPhone 5C and iPhone 5S.

Users can simply add their credit or debit card on file from their iTunes Store account for payments. Apple Pay supports credit and debit cards from the three major payment networks, American Express, MasterCard and Visa, issued by the most popular US banks including Bank of America, Capital One Bank, Chase, Citi and Wells Fargo.

In addition to the 258 Apple retail stores in the US, some retailers that will support Apple Pay include Bloomingdale's, Disney Store and Walt Disney World Resort, Duane Reade, Macy's, McDonald's, Sephora, Staples, Subway, Walgreens and Whole Foods Market. Apple Watch will also work at the over 220,000 merchant locations across the US that have contactless payment enabled.
TOI