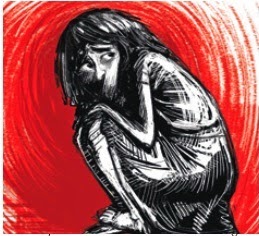 This is the second case within a fortnight of a slum dwellers child of that age being allegedly raped in the vicinity.

While no arrests have been made so far, the police are probing the possibility of the accused being a psycho and the same in both cases.

According to the police, Sunday's incident involved a girl whose family live under the National Park flyover in Borivali (East). Her body bearing strangulation marks was discovered early Sunday morning on a pile of clothes just 50 feet from the spot where her family slept.

According to the statement given by the girl's mother to the police, the family hails to his native place. The mother and her six children, including the victim, had gone to sleep around midnight. When the mother woke in the morning, she found the girl missing. A few minutes later she found the girl's body lying in a pool of blood a short distance away.

The police were informed, and the girl was taken to Bhagwati Hospital where she was declared dead before admission. Police say she had injury marks on her private parts and her face.

The Kasturba Marg police have registered a case of kidnapping, murder and rape, along with relevant sections of the Protection of Children from Sexual Offences Act, and are examining CCTV footage of the area.

Just 10 days earlier, a similar incident had taken place in Saibaba Nagar at Kandivali (West), where a five-year-old girl was abducted and raped while her mother and brothers slept on a footpath nearby.

The next morning, the girl's mother found her crying and bleeding and took her to the BMC-run Shatabdi Hospital. When her condition worsened, she was shifted to Nair Hospital at Mumbai Central. According to doctors, a broom had been inserted into the girl's private parts and she had suffered grievous injuries to her intestines.

While the girl is recuperating in hospital, the accused could not be identified despite being captured on CCTV. His face is not visible and the footage only shows him walking away with the girl.

Senior Inspector Vitthal Damgude of the Kasturba Marg police said, “We are probing all angles. We are also looking at the possibility of the accused being the same in both the cases. Investigations are on.“

Speaking to Mumbai Mirror about Sunday's incident, sources from Bhagwati Hospital's post-mortem centre said, “There were several torture marks on the girl's body. She was brutally raped and then strangled”.

Doctors, however, have ruled out any object being inserted into the girl's private parts. Samples of her nail, hair and a swab of her private parts have been sent for tests to the Kalina Forensic Laboratory.