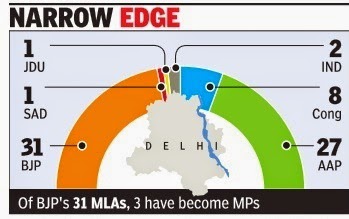 This could pave the way for BJP to take over the reins of the city and avert the pros pect of early polls.

BJP, with 32 MLAs, including one from ally Shiromani Akali Dal, is the single largest party in Delhi. Three BJP MLAs -Harsh Vardhan, Ramesh Bidhuri and Parvesh Verma -who were elected to the Lok Sabha recently, are yet to quit their respective assembly seats.

Top sources in the government told TOI that the LG's note has been forwarded by the President to the Union home ministry for its opinion.

When contacted, Rashtrapati Bhavan sources confirmed that Jung had submitted a report on Delhi on Thursday evening. “We received the report this evening and have sent it to the ministry of home affairs for its view,“ said an official. The report said BJP should be allowed to prove its majority on the floor of the assembly , said sources. There are indications that political interests of BJP and the fact that many legislators do not want an election could lead the home ministry to endorse the LG's view.

Delhi has been under President's rule ever since Arvind Kejriwal resigned as chief minister in February .

Although AAP has demanded that the assembly be dissolved and elections called, the LG recently told TOI that he was exploring the possibility of the formation of a government and was not done with the exercise yet. The Supreme Court is seized of a petition moved by AAP and is scheduled to hear the matter on Monday .

Sources in BJP expressed confidence that though they are short of the majority mark, they can manage the numbers.

The party requires 35 MLAs to prove majority in the 69-member assembly (since the Speaker, the 70th member, only needs to vote in a tie). The numbers game may not be such a hard trick to pull off for the BJP if it takes a cue from opposition Congress.

In 1998, the Vajpayee government lost the no-confidence vote by one vote after Congress brought Orissa CM Giridhar Gamang­­who had not tendered his resignation as Lok Sabha MP--to vote against the NDA government, ensuring its defeat. Gamang also survived a challenge to his action in court.

“The BJP could similarly ask Harsh Vardhan, Bidhuri and Verma to vote. This will ensure they have 32 votes,“ a source said. There are indications that MLA Vinod Kumar Binny , who was expelled from the AAP , and independent legislators Rambir Shoukeen and Shoaib Iqbal may be persuaded to support the BJP , to help it touch the magic figure of 35.

BJP circles have been rife with speculation about CM probables. By all accounts, Union health minister Harsh Vardhan, who was projected as CM candidate in the assembly elections, remains the favourite so far as the leadership is concerned.

However, the fact that his resignation will reduce the party's numbers in Lok Sabha and necessitate a byelection in a constituency where the party prevailed only because of the Narendra Modi wave are hindering the prospect of his immediate return to Delhi politics.

Sources said party veteran and former finance minister Jagdish Mukhi will be a strong contender if the party decides to limit the field to MLAs. New Delhi MP Meenakshi Lekhi is being discussed as another strong possibility should the party decide to broaden the pool from which to recruit.