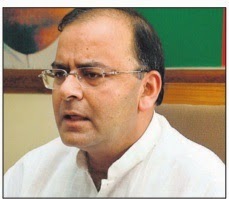 Finance minister criticises India's premier investigative agency for resurrecting 12-year-old divestment case and talks at length on the economy, coal blocks & Rajan's performance. Finance minister Arun Jaitley was sharply critical of the Central Bureau of Investigation (CBI) for resurrecting a disinvestment case that's more than a decade old, saying such actions could damage the country's overall investment climate and undermine the confidence of civil servants, which are seen to be recovering after the gloom of the last few years.

In a wide-ranging interview with ET ahead of the Narendra Modi government marking its first 100 days in office, Jaitley, who is also the country's minister for defence and corporate affairs, touched on a range of matters. These included the prospects for revival, coal block allocations and central bank Chief Raghuram Rajan's performance. The Modi government was sworn in on May 26.

The FM said the worst may be over for the economy and that the new government had successfully managed to reverse all-round negative sentiment. First-quarter GDP growth came in at 5.7%, exceeding expectations and signaling a strong turnaround after two years of below-5% growth. Jaitley said he was confident about meeting the deficit target.

The first information report (FIR) in the case against former disinvestment secretary Pradip Baijal and others in the sale of Laxmi Vilas Palace Hotel in Udaipur in 2002 was unfortunate, said Jaitley. “Both the minister and secretary had a high reputation of personal integrity and if 12 years later an FIR is registered, it hurts governance because it lowers the confidence of the civil servants to take decisions,“ Jaitley said.

The move by CBI risks reviving concerns among bureaucrats about past actions coming back to haunt them, a fear that had just begun to lift -a point Jaitley conceded. “It hurts governance because it lowers the confidence of the civil servants to take decisions.“

Such actions sap morale and also worsen the business climate.

“If we are to ease the doing of business in India, if we are to enhance investor confidence, we have to free them of the risks,“ Jaitley said. “And, transactions being questioned after 12 years either by investigators or by courts are a risk. It is a huge risk, which will hurt the investment environment in the country. There is no reason at a belated stage to rake up these issues unless there is established evidence of corruption, which I believe does not exist.“

Jaitley urged all the judiciary, executive and legislature to respect their constitutional mandate, making it clear that lines need to be drawn.

Jaitley said there was no sign of wrongdoing in the Laxmi Vilas Palace deal.

“I have been, as a minister at that time, a witness to those transactions and I have no doubt in my mind that all the disinvesment transactions were completely above board,“ the finance minister said. Arun Shourie was disinvestment minister in the then Atal Bihari Vajpayee-led National Democratic Alliance (NDA) government.

The minister ruled out any immediate action by the government, saying institutions such as CBI and the Central Vigilance Commission need to draw a “Laxman rekha“ themselves as the law ýcan rarely define jurisdiction. ýHe said statesmanship and vision were needed to maintain the fine balance between executive and legislature on one side and judiciary on the other.

He shrugged off any suggestion that the centralisation of powers in the Prime Minister's Office was leading to a kind of policy paralysis, an accusation often made against the previous government though for other reasons. He said ministers in the Modi government take decisions but are accountable as the Prime Minister takes an active interest.

“In fact, the Prime Minister has decentralised a lot of authority and power in decision-making to the ministers,“ he said. “This is my experience in all the ministries that I look after. There is decentralisation but with accountability.“

He was careful in his assessment of Reserve Bank of India governor Raghuram Rajan, who completes a year in of fice in a few days “I don't think it's fair to comment on individuals. He has very high credentials and in his own field he is rated very high. He is doing his job to the best of his ability and his emphasis appears to be on the management of inflation, which is a legitimate effort. And, I am sure as the inflation moderates and stabilises, he would decide appropriately on interest rates,“ he said.

On the Supreme Court decision in the coal block case, Jaitley said there were positives aspects to the ruling that declared more than 200 coal block allocations illegal.

“There is one silver lining in that decision, that natural resources cannot be arbitrarily distributed. But, then there are problems. The power sector itself gets adversely affected and the financial viability of power generating firms and hence the NPAs. So, ideally speaking, having taken this particular decision, I hope the future of these coal blocks is expeditiously decided and it does not linger on,“ he said. Hearings resume on the fate of the blocks on Monday. Jaitley suggested that the Foreign Investment Promotion Board is likely to remain with the finance ministry.

When asked whether the finance ministry would have a greater role to play in FDI, he was noncommittal.

“Let everybody do their function. DIPP (department of industrial policy and promotion, under the commerce ministry) is doing a good job”. Source ET