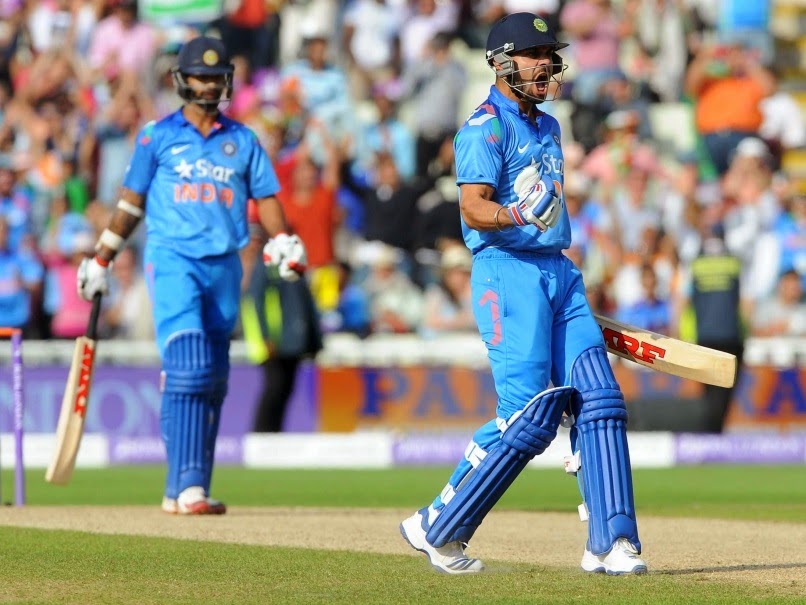 India Engalnd Cricket Series India Won the Series as per Results of 3-0 Clean sweep till now.
BIRMINGHAM: India captain Mahendra Singh Dhoni feels his side played a “ perfect game” yesterday as the visitors thrashed England by nine wickets in the fourth ODI to take an invincible 3- 0 lead in the five- match series here.

Opting to bowl, India first restricted England to a modest 206 and then overwhelmed the target in 30.3 overs to record their third consecutive victory in the ODI series at the Edgbaston, in what turned out to be yet another lopsided contest.

“Considering the first game, our performance only got better,” Dhoni said at the post- match presentation.

“There is a tendency to lax after win, but we only got better and today was a perfect game,” he said.

“The seamers bowled in the right areas and it was crucial because I thought it wouldn’t turn much. The fast bowlers set it up, because they took wickets and when the spinners came the batting was under pressure.” Dhoni praised young Ajinkya Rahane, who came in to open the batting in place of injured Rohit Sharma and scored his maiden ODI century with a 100- ball 106- run knock. Opening the innings, Rahane and Shikhar Dhawan ( 97 not out) put on 183 runs for the first wicket to set the platform for the victory.

“ The openers, if they can face 10 to 12 overs, it gives us a platform. It was good to see Dhawan back in form. Rahane was always someone who was third in line for the opening slot and he has made the most out of it,” he said.

England captain Alastair Cook feels India outplayed the hosts in all departments of the game. “ A very tough day. The sport turns change so quickly.

It is frustrating not to play to your potential,” he said.

“India certainly batted better, fielder better, and bowled better. It is always tough to lose three games in a row and in a manner that we lost,” Cook said.
Rahane, Dhawan pair fire again AJINKYA Rahane and Shikhar Dhawan have hit it off the top of the order. Their 183- run partnership made yesterday’s contest a thoroughly one- sided affair.

Rahane, who was promoted in place of the injured Rohit Sharma put on 35 runs with Dhawan in the third ODI. Incidentally, India’s last century opening stand was also between Rahane and Dhawan when they put on 121 against Afghanistan during the Asia Cup in March.

Another failure for captain Cook ENGLAND skipper Alastair Cook is in no mood to prove his friend Graeme Swann wrong.

The spinner recently commented that ‘ England would be better off without his captaincy at the World Cup’. This is England’s fifth successive bilateral series loss under Cook.

Raina sets a fine example on the field

SURESH Raina has made India look a different team in the fielding department in the ODI series. The fielders looked energetic as Cook managed just one from his first 15 balls.

Raina didn’t seem to be doing anything wrong on the field.

Bhuvi was just too good at the start

MOEEN Ali who came in for Ben Stokes did all the hard work, scoring a quickfire career best 50- ball 67. But that wasn’t enough as England managed just over 200.