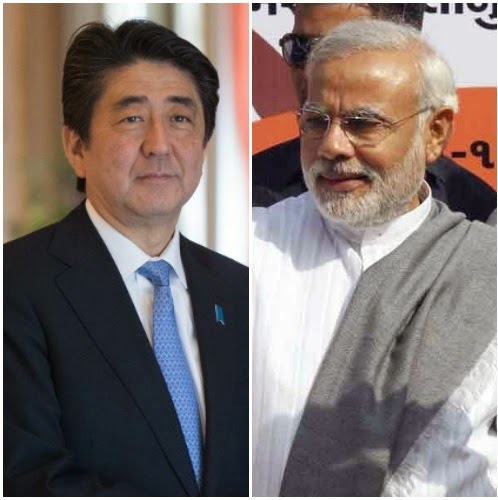 Prime Minister Narendra Modi flew to Tokyo on Sunday for crucial summit talks with his Japanese counterpart Shinzo Abe on Monday, after an overnight stay in Kyoto where he visited two ancient Buddhist temples with the latter accompanying him.

Modi, 63 and Abe, 59, who share cordial relations and hit it off well during their interaction in the ancient city of Kyoto, will have a substantive summit agenda.

Cooperation in the fields of defence, civil nuclear, infrastructure development and rare earth materials is expected to top the agenda with Modi hoping that his visit will “write a new chapter” in bilateral ties and take the Strategic and Global Partnership to a higher level.

Some agreements, including in defence and civil nuclear sectors, are expected to be signed. Among the agreements to be signed is one on joint production of rare earth materials. Clad in all-white kurta pyjama, sleeveless jacket and white sandals, Modi paid obeisance at the two prominent Buddhist temples in Kyoto -Toji and Kinkakuji -offering prayers and mingling with the common people and tourists. He first went to Toji Temple, which is inspired by the trinity of Brahma, Vishnu, Mahesh of Hindu philosophy. Modi was at the temple complex for about half-an-hour during which he enquired about the history of the eighth-century Buddhist pagoda.

While leaving the complex, Modi thanked Abe for accompanying him to the temple and spending time with him. Abe, on his part, told Modi that this was only the second time that he had visited Toji temple, the last being during his student days.

In a series of tweets, Abe spoke about his nation's “deep historical ties“ with India. “I am very glad that PM Modi enjoyed the cultural heritage of Japan's ancient capital, Kyoto,“ Abe tweeted. PTI

KYOTO PM Narendra Modi on Sunday discussed cooperation with Japan to combat sickle cell anaemia that is prevalent in India's tribal regions, an official said. Modi met Shinya Yamanaka, Japan's stem cell pioneer and 2012 Nobel Prize winner, at Kyoto University and discussed treatment of the disease. They discussed the “possibilities of sickle cell anaemia cure“and “prospects of cooperation among Indian and Japanese institutes“, tweeted an external affairs ministry spokesman. Sickling decreases the cells' flexibility and results in a risk of various life threatening complications. It mostly occurs in regions where malaria is rampant.