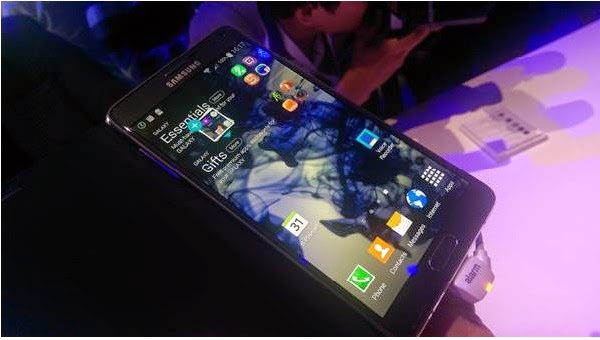 BERLIN: Samsung's latest flagship Note 4 has just been unveiled at an Unpacked event in Berlin, ahead of IFA 2014. At first glance, the device doesn't seem too radically different from its predecessor, the Note 3. However, looking closely, there are major improvements to the screen (quad HD super amoled), build quality (metal rim), camera (16MP rear with optical image stabilisation), S Pen (doubled pressure sensitivity) and interface as well.
First, to get the specifications out of the way, the Note 4 will come in two broad versions - Octa core (1.9Ghz quad + 1.3Ghz quad) and quad core (2.7Ghz) for different markets. RAM is pegged at 3GB like before and storage is 32GB (expandable, as usual). The battery is a slightly larger 3,220mAh - but Samsung says that due to lower battery consumption, it delivers 7.5% better battery life. In addition, a fast charge feature charges the battery up to 50% in just 30 minutes. Previous features like USB 3.0 port and IR port have been retained - while the heart rate sensor and fingerprint scanner from the Galaxy S5 has been added too.

The display is simply gorgeous - Samsung knows how to make displays properly and this shows here - it's truly worthy of a flagship. The quad HD (2560 x 1440 pixels) 5.7-inch super amoled has colours that pop - plus it promises to deliver an increased colour gamut.
Samsung has paid close attention to the new design. Since so many people asked for more metal - the Note 4 has real metal instead of plastic that looks like metal. The soft touch leather finish has been retained and there are several new covers to complement the device (including Svarovski covers and some by the new partner Mont Blanc). Interestingly, Mont Blanc has also partnered to create special pens that can also work as a stylus for the Note.

The camera in the Note 4 now gets optical image stabilisation - this will go a long way in creating shake free photos and videos. The front camera (3.7MP) has been enhanced for 'selfies' - it now has a wider angle lens and is works better in low light (thanks to wider f1.9 aperture). In addition, a new software feature lets you take panoramic selfies with the front camera by moving the phone from left to right.

The Note 4 has some additional standout features that are completely new to the mobile space. For instance, it is equipped with multiple microphones (for the usual noise cancellation) - but these microphones can also detect direction of sound. For instance, if you're taking an interview, it can record video from one direction while suppressing all ambient noise. Or if placed on a table with a round table discussion, it detects where the sound is coming from to record that more clearly.
Overall, the Note 4 is definitely a big step up - it doesn't feel too big and there's a much more premium feel to it. Instead of something completely different, Samsung has taken the best features of the Note 3 and made them better. If you're a fan of the Note series, there's really nothing more that you could have asked for.
ET