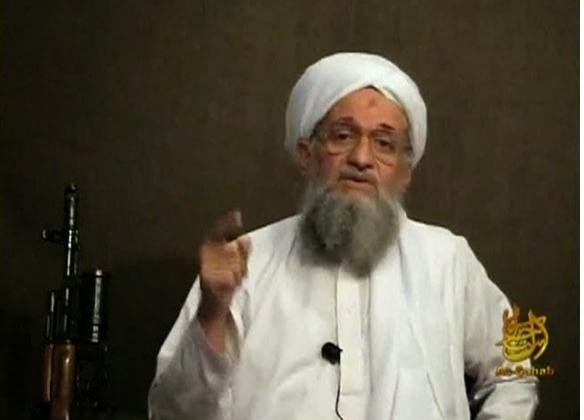 Dubai: Al Qaeda leader Ayman al Zawahri on Wednesday announced the formation of an Indian branch of his militant group he said would spread Islamic rule and "raise the flag of jihad" across the subcontinent.
In a 55-minute video posted online, Zawahri also renewed a longstanding vow of loyalty to Afghan Taliban leader Mullah Omar, in an apparent snub to the Islamic State armed group challenging al Qaeda for leadership of transnational Islamist militancy.

Zawahri described the formation of "Al Qaeda in the Indian Subcontinent" as a glad tidings for Muslims "in Burma, Bangladesh, Assam, Gujarat, Ahmedabad, and Kashmir" and said the new wing would rescue Muslims there from injustice and oppression.

Counter-terrorism experts say al Qaeda's ageing leaders are struggling to compete for recruits with Islamic State, which has galvanised young followers around the world by carving out tracts of territory across the Iraq-Syria border.

Islamic State leader Abu Bakr al-Baghdadi calls himself a "caliph" or head of state and has demanded the loyalty of all Muslims.

The group fell out with Zawahri in 2013 over its expansion into Syria, where Baghdadi's followers have carried out beheadings, crucifixions, and mass executions.

As well being an indirect repudiation of Islamic State, the announcement could pose a challenge to India's new prime minister, Narendra Modi. He has already faced criticism for remaining silent about several incidents deemed anti-Muslim, underscoring fears that his Hindu nationalist followers will upset religious relations in the majority Hindi nation.

However, while al Qaeda is very much at home in the Afghanistan-Pakistan border area, due to influential contacts and a long presence there, it is a minnow compared to local militant groups in terms of manpower and regional knowledge.

Over the years Zawahri and his predecessor Osama bin Laden, killed by U.S. forces in 2011, repeatedly pledged allegiance to Mullah Omar, in return for the safe haven he granted their followers in Afghanistan.

The statement did not mention Islamic State or Baghdadi, but it appear to take a subtle dig at the group's efforts at administering areas it has seized in Iraq and Syria.

Islamic State's effort at state-building is something never attempted by al Qaeda's central leaders, who traditionally have preferred to plot complex attacks on targets in the West.

"If you said that you are doing jihad to defend the sanctities of the Muslims, then you must not transgress against them or their money or honour, and not even transgress your mujahideen brothers by word and action," he said.

"Discord is a curse and torment, and disgrace for the believers and glory for the disbelievers," he said. "If you say that by your jihad you do not want but the pleasure of Allah, then you must not race for governance and leadership at the first opportunity."

Muslims account for 15 percent of Indians but, numbering an estimated 175 million, theirs is the third-largest Muslim population in the world.

Centuries of rule by medieval Muslim invaders drove a wedge between Hindus and Muslims. Tensions have grown since Pakistan was carved from Muslim-majority areas of India in 1947, a violent partition in which hundreds of thousands were killed. In the era of Washington's "war on terror", some Indian Muslims have begun to sympathise more with hardline pan-Islamic groups and causes.
Reuters