Sub: Termination of the LARSGESS Scheme in view of directions of Hon’ble High Court of Punjab and Haryana and the orders of Hon’ble Supreme Court of India in SLP (C) No. 508/2018 dated 08.01.2018.
Ref: Board’s letter of even number dated 27.10.2017.
The Hon’ble Punjab and Haryana High Court in its judgement dated 27.04.16 in CWP No. 7714 of 2016 had held that the Safety Related Retirement Scheme 2004 (later renamed as the Liberalised Active Retirement Scheme for Guaranteed Employment for Safety Staff {LARSGESS}, 201 0) “prima facie does not stand to the test of Articles 14 and 16 of the Constitution of India. ” It had directed “before making any appointment under the offending policy, let its validity and sustainability be revisited keeping in view the principles of equal opportunity and elimination of
monopoly in holding public employment.” Thereafter, in its judgement dated 14.07.17 (Review Petition RA-CW-330-2017 in CWP No. 7714 of 2016), the Hon’ble High Court reiterated its earlier direction and stated “such a direction was necessitated keeping in view the mandate of the Constitution Bench in State of Karnataka Vs. Uma Devi, (2006) 4 SCC 1.”
1.1 . In the Appeal against the judgement of the Hon’ble High Court of Punjab & Haryana, the Hon’ble Supreme Court of India, while disposing of the SLP (C) No. 508/2018 vide its order dt. 8.01.18, declined to interfere with the directions of the High Court.
2. In compliance with the above directions, Ministry of Railways have revisited the scheme duly obtaining legal opinion and consulted Ministry of Law & Justice. Accordingly, it has been decided to terminate the LARSGESS Scheme w.e.f. 27.10.2017 i.e. the date from which it was put on hold. No further appointments should be made under the Scheme except in cases where employees have already retired under the LARSGESS Scheme before 27.10.17 (but not normally superannuated) and their wards could not be appointed due to the Scheme having been put on hold in terms of Board’s letter dated 27.10.17 though they had successfully completed the entire process and were found medically fit. All such appointments should be made with the approval of the competent authority.
3. Please acknowledge receipt.
Hindi version will follow.
(N Singh)
Joint Director/E(P&A)
Railway Board
Download Official Letter RBE 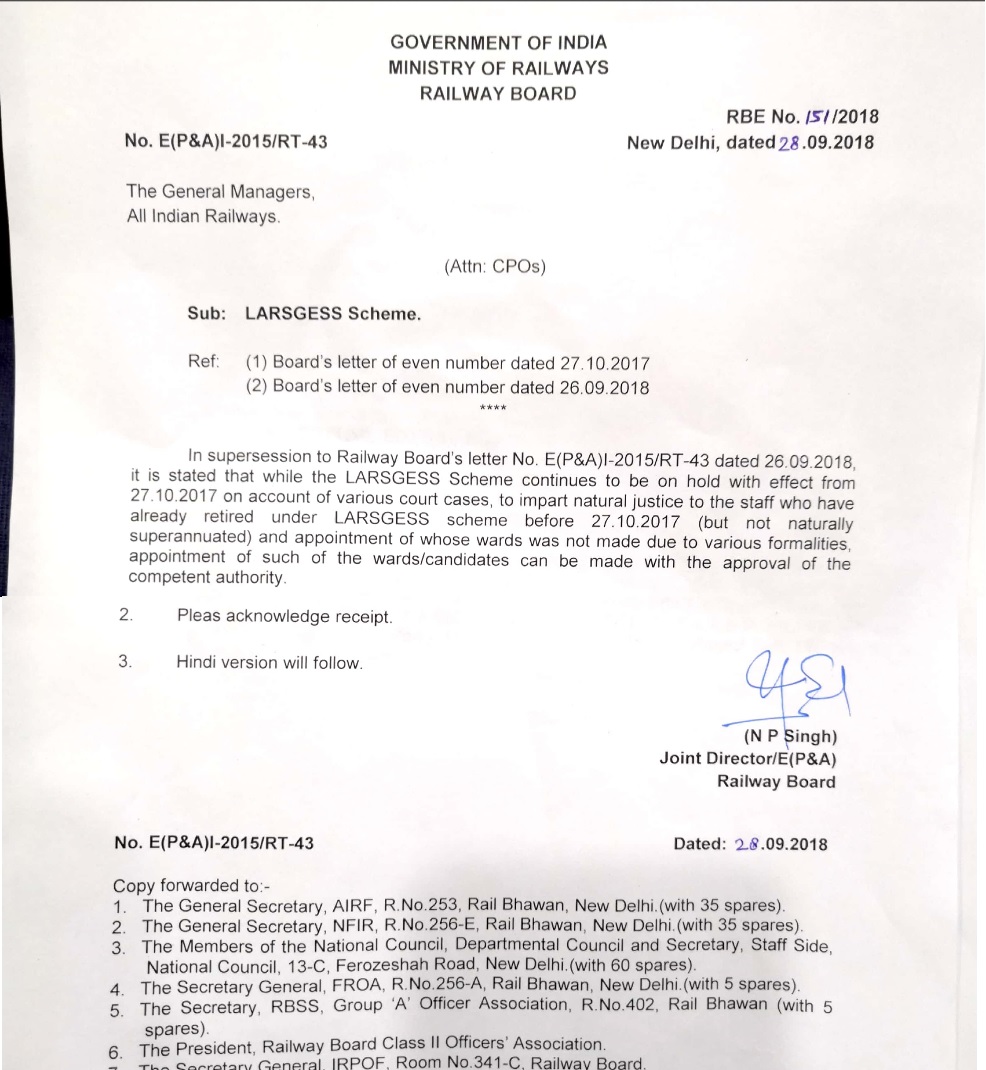