Menu
Home » biology-gk » interview-questions-tips » When would we get to see Titanic-2?

When would we get to see Titanic-2? 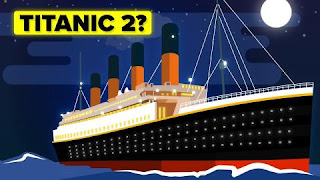 On April 15th 1912 tragedy struck when on its maiden voyage, British mega ship Titanic hit an iceberg and soon after found herself at the bottom of the North Atlantic Ocean. The manufacturers claimed it unsinkable, but more than 1,500 of the 2,224 passengers and crew aboard died that day, making it one of the deadliest commercial peacetime maritime disasters in modern history.
When would we get to see Titanic-2?


There have been a number of rumors about the proposed plan to build the Titanic 2 and most seem to link back to an Australian business tycoon and millionaire Clive Palmer. He originally announced the project back in 2012 with the new Titanic proposed to be on the water by 2016 as the flagship of his cruise company Blue Star Line Ltd based in Brisbane, Australia.

The new nine-deck ship would be 885 feet long, which is two feet longer than the original Titanic and 174 feet high, with a maximum speed of 24 knots. She would have been able to carry 2,400 passengers, 177 more than the Titanic. But 2016 came and went and no Titanic 2 has yet turned up.

So why the delay and is Clive Palmer really going to be launching this ship? Back in 2015, Australian news network ABC ran a report on Palmer claiming that his business empire was facing financial hardship due to a drop in iron ore prices and a $2.3 billion writedown of his main asset, the Sino Iron project in Western Australia. It looks like this could have been the catalyst for the delay in producing Palmer’s dream ship as in the same article the boat-building project's Finnish engineering partner, Deltamarin, was quoted confirming that work with Mr. Palmer's Blue Star Line had come to a halt.

Is Palmer broke? Despite experiencing cash flow issues it’s hard to get a genuine insight, as Palmer’s three main companies had not filed any financial returns since late 2013.